See ALL events ADD an event SUBSCRIBE to Events newsletter 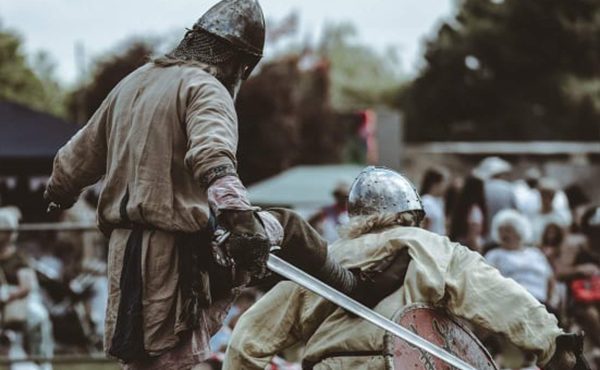 At the small village of Ceadeles Funtan (The modern day Chalfonts – meaning the chalk springs) a warband of Vikings have arrived and taken over the village as a base of operations to raid further into Saxon territory. They have ransacked the village, taken prisoners as Thralls (Slaves) and are busy plotting their next move whilst making loose with the food and drink they have pillaged from the Saxon villagers.

However unbeknownst to the Vikings, a Fyrd (or local militia ) of Saxons has been dispatched from Aegel’s burgh (The Saxon fortified settlement of Aylesbury) to deal with the situation. The Saxons arrive and demand the Vikings return to the Danelaw but emboldened by their success so far and their warlike bravado they refuse and fighting breaks out. As the two sides form shield walls the fate of the village hangs in the balance…Will the vicious Vikings succeed and continue to raid and pillage the area or will the Christian forces of Wessex overcome their heathen enemy and restore order to the land?

Get involved in games, music, storytelling and fun activities from the Viking age. Then join us to watch as the raid unfolds and see who wins in the battle between the Vicious Vikings and the Christian forces of Wessex.

This is a Premium Admission Event. Free entry for Annual Pass holders.