A to Z of adventure for Beavers

A contingent of Marlow children were part of over 820 Beaver Scouts (boys and girls aged 6 to 8) who had an adventurous day at the Buckinghamshire Scouts Beaveree. Abseiling, circus skills, climbing, face painting, golf, inflatables, orienteering, potion making, water rockets and zorbing were just some of the activities the children enjoyed. The event was held at PACCAR camp site in Chalfont. With perfect weather conditions the children were able to decide which activities they wanted to do and when.

Beth Moir aged 7 said, “I liked making owls, the spider’s web and the potion and I’ve also enjoyed going on the bouncy castle. I hope to go on the climbing wall later.” Leo Lincke aged 6 said, “I loved the zorbs and the inflatables. Going to Beavers is so much fun, it’s exciting and we have lots of adventure.”

Lewis’ mother Anneka said, “Beavers had been good for Lewis. It’s helped with his social skills and he is learning about how to be independent. He has made new friends and his confidence has grown. Beavers has also given him the opportunity of doing a wide range of activities outside of school.”

The event, organised by Tessa Ingram, Lead volunteer for Buckinghamshire Beaver Scouts said, “This is the biggest event we have organised since before the pandemic started. None of the children will have experienced one of these events before. Seeing them on the climbing tower, inside the zorbs, playing games or following a trail in the woods reminds us all of the fun they can have with their friends.”

Adult volunteer Helena Brookes who became a volunteer 18 months ago said, “I became a volunteer with Scouts as I wanted to give my daughter Alice, the same experiences I had as a child.” She added that the Group have had sleepovers, been to the fire station and had a visit by Police Community Support Officers.” She said, “Being a volunteer has helped me build relationship with the parents of children in the Colony. I have engaged with people in the community, and have learnt some first aid skills.” Helena added, “There is a need for more volunteers so more children can have the types of adventures that Alice is having.”

If you are interested in becoming a volunteer with Scouts, please visit www.scouts.org.uk 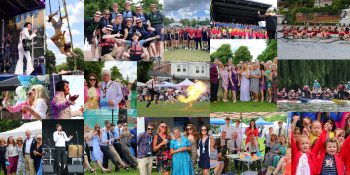 Marlow Regatta was back for 2022, and it was so good to have it back! The sun shone for both days, and the beauty of our Town Regatta format is…