Write up and photos by Neil Venison for MyMarlow.co.uk

MyMarlow attended Armed Forces Day Buckinghamshire and Milton Keynes on what was going to be a 33° scorcher.

After capturing a military vehicle procession from Globe Park café escorted by the Royal British Legion Riders we were set for an action packed day of aerial entertainment and music. 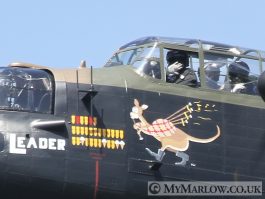 After the flag raising we looked to the skies for the Lancaster fly-past one –  of only two airworthy Lancaster left in the world. Control tower relayed information to the crowd as to the whereabouts of the plane’s arrival and we were treated to a fantastic three circuits of the airfield – we even managed to capture a picture of the pilot waving at the crowd.

It was just under an hours break before the two hour flying display started, so we took a walk around the many military stalls, vehicles and the entertainment tents enjoying upbeat songs from the Polka Dots. 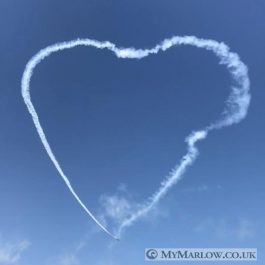 The air display started with amazing acrobatic flying from Mark Jefferies flying who even drew a perfect smoke trail heart in the sky. For the next hour displays of military aircraft flew with amazing precision including a re-enacted WW1 battle by the Bremont flying display team including aerial flash bangs and real explosions on the ground. The aerial show was brought to a close by The Silver Stars Display Team landing on a cross only metres from the crowd.

We bumped into Paul Palmer from Marlow, but now living in Downley who summed up the day well: “I thought it was a great event. I was surprised to see the Lancaster fly past 3 times, a real treat to see one of the two remaining Lancaster’s being displayed at Booker. It was a really enjoyable day, so much so see, and the bands performing in the bar were good too.”

Flag lowering in the main arena brought the show to a close on what was an extremely enjoyable armed forces day at Wycombe Airpark.

We hope you enjoy our photos gallery – photos all by Neil Venison for MyMarlow.co.uk