This is Poppy Woodhams-Beazeley, age 7½.

Poppy was born with half a heart and a visual impairment, but she hasn’t let that stop her living life to the full!

Poppy’s dad works at the Thames Water plant at Little Marlow. Back in June locals Jane and Les Meaden organised a cricket match between The King’s Head and The Queen’s Head teams, and Mark Simons – who manages The King’s Head – organised a BBQ event with raffles and games.

The activities raised a very respectable total of £2,394 and this week Poppy visited the village to meet and thank the cricketers and everyone involved. 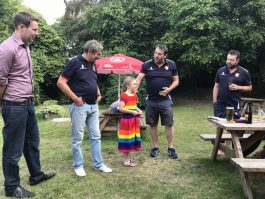 Cricket captain Daniel Rowe presented Poppy and her parents, Steve and Emily, with the cheque plus her very own cricket jersey (which reached her knees!).

“Poppy has overcome so much in her life so far, and all the time raising money for charity to help others,” explains Mark. “The cricketers, locals, Old Spot Pubs and everyone involved wanted Poppy to have something for herself.”

The family have adventures planned in Scotland in August including trips to the Edinburgh Tattoo, Hadrian’s Wall and some puffin watching!

Poppy has already had three open-heart surgeries, and the possibility of a full heart transplant is a very real one, in the hope of getting her to adulthood. She also risks losing her sight completely, hence the family’s motivation to provide Poppy with plenty of adventures, experiences and memories.

Poppy was presented her Child of Courage award by Chris Tarrant at the Pride of Reading Awards in November. She has raised funds for Little Hearts Matter and for clinical research into eye disorders.

She has also just won an Arts & Craft prize as part of the Riding for the Disabled Association’s National Championships, and has recently fulfilled her dream of playing piano to an audience with her own composition (she plays by ear).

We asked Poppy what advice she would give to anyone who was going through something scary or difficult and she said:

Well done to The King’s Head, the cricketers and everyone in Little Marlow who rallied round for this small but mighty force of nature!