Marlow resident Louise Gibson is joining the InternationElles, a team of ten female cyclists, who will be cycling all 21 stages of the route of the Tour de France, a day ahead of the male pro cyclists in the official race.

The team from all over the world will be riding the gruelling 3,460km, which will take them from Brussels on 5 July to Paris on 27 July via the Alps and the Pyrenées. The 2019 route will be the most mountainous in the 106-year history of the event so it will be challenging for the pros just as much as for a team of amateurs with day jobs!

The male only Tour de France has 21 stages with a separate official race for female riders only being a single day race. InternationElles want to change this, and help highlight the inequality that currently exists in cycling. The newly formed InternationElles team were brought together by the powers of the Internet, and will be riding alongside a female French team “Donnons des Elles au Vélo J-1” who are undertaking this challenge for a fifth year.

Louise told MyMarlow “I’ve been cycling for about five years. I got into it from running because I kept getting injured and eventually needed surgery and was told to never run again but to take up cycling. I now wish I’d taken it up when I was younger!” 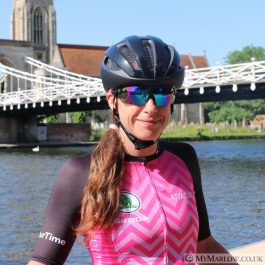 Louise has various cycling achievements already, having won a number of races including 24 hour challenges and the last two years she has qualified to represent Great Britain in the Age Group (ie amateur) World Championships.

Louise told us “I applied to be part of the French team that take on this challenge each year but they were keeping it French only –  so a few of us got together online and set up an international team to ride with them. The main point is to try and close the gender gap in cycling. Women should have the same opportunities as men, simple as that.”

“Training has gone really well, I’ve spent lots and lots of hours on my bike! I’ve ridden nearly 5,000 miles this year already. I’m nervous about the task in hand but I can’t wait to get started and try and make a difference within women’s cycling. All of us in the team are amateur and have day jobs and a couple of us are mums. plus – we are doing it the day before the pros when the roads are still open!”

At MyMarlow we wish Louise and the team all the very best of luck in this mammoth challenge!!

How to track Louise’s progress

Once they are underway, the team’s progress scan be tracked here.

Rebellion achieve their highest ever donation level and give £65,000 to local hospital charity Scannappeal.